10 Football Routes Every Receiver Should Know

Playing the role of receiver requires much more than speed and the ability to catch the football. In order to be effective at the position, players must run crisp, consistent routes that provide their quarterback the confidence to know they will be where they’re supposed to be.

So once you’ve identified who your playmakers are, it’s time to train them up to be the best route-runners they can be. The following routes are an excellent place to start.

Virtually every position coach and offensive coordinator has their own nuances and variations related not only to the passing tree in general, but also based on their own preference for the depth and execution of a given route. It should be noted that the routes discussed in this article are loosely based off of the 0-9-route passing tree utilized by Auburn University. 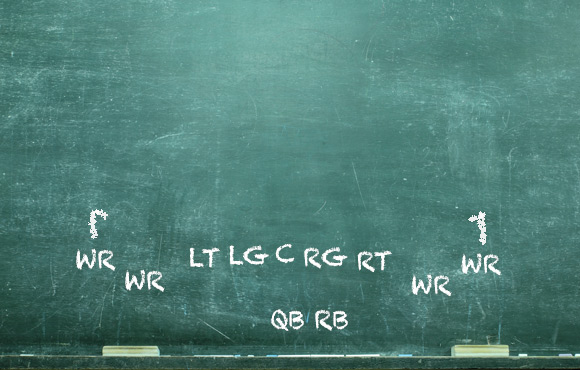 The stop route is a quick-hit route run most often by the outside receiver when a defense is caught in a soft zone. The receiver will threaten the corner's outside shoulder off the ball, push up field to five yards, breakdown and drive off of his outside foot back towards the line of scrimmage. The throw, ideally, will come on the receivers outside shoulder, allowing him to turn away from the defense and towards the sideline. 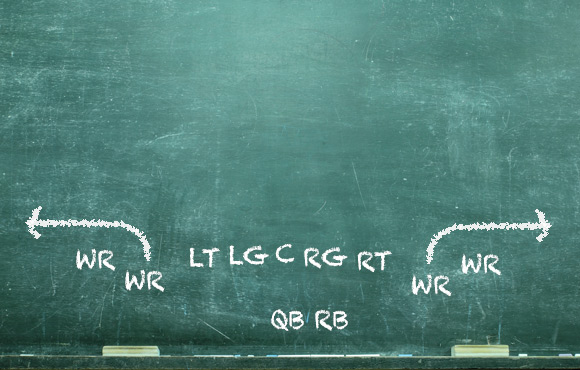 The quick out is commonly executed by the slot receiver—due, in large part, to the additional space he has to operate outside of where he's lined up. The out occurs at three yards, with little-to-no push up field. The outside break is a soft—or rounded—break, versus the hard break we see from a dig route, for example. 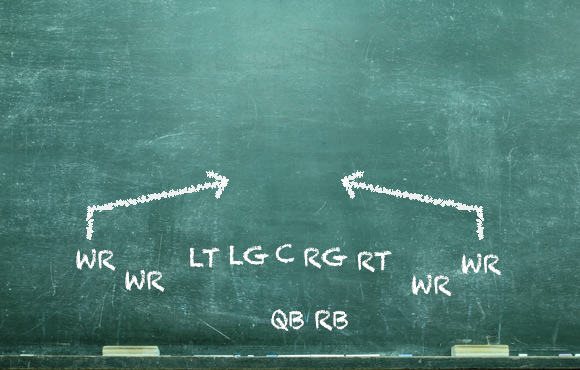 The slant route is a staple and one of the most frequently used routes in any offense. Receivers will push three steps—or five yards—up field before breaking hard off of the outside foot across the face of the defender towards the middle of the field. The catch will occur 7 to 9 yards downfield in most cases. 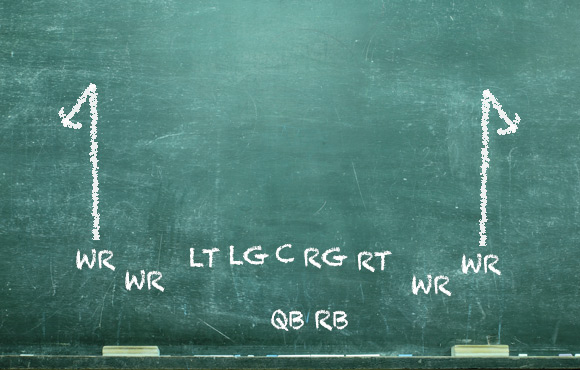 The comeback route is designed to take advantage of soft man or deep zone coverage. Receivers will push eight yards up field, plant off of their inside foot and break hard at an angle towards both the sideline and the line of scrimmage. The throw should be delivered on their outside shoulder, away from the defensive back. 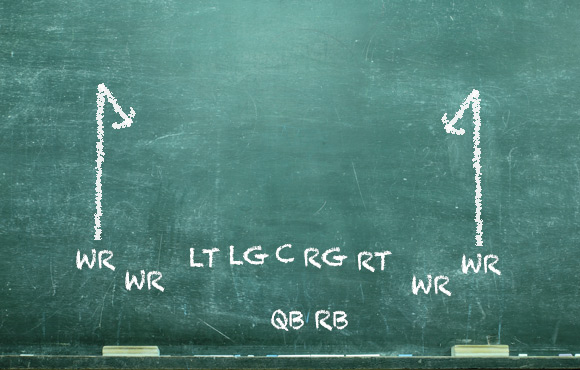 The curl route is a bit more complex and is designed to momentarily create the illusion of a go route. Receivers will push up field 8 to 12 yards, plant off of their outside foot and break back towards the quarterback. Often referred to as a "hitch," the curl is, for most intents and purposes, the opposite of the comeback. 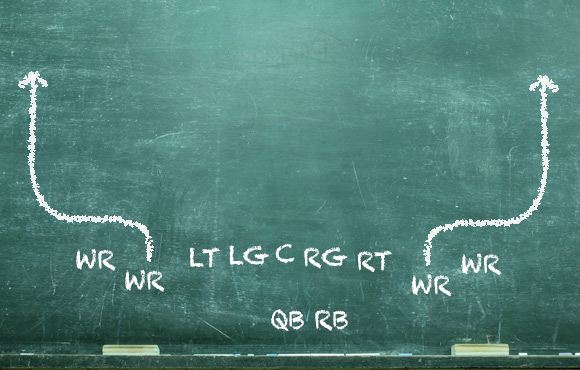 The big play cousin of the quick out, the out and up is designed to appear initially like the quick out in hopes of enticing the defender to "jump" the route. The quarterback will often shoulder fake as though he is about to deliver the football, but the receiver will abruptly plant off of the foot nearest the line of scrimmage and sprint vertically up the sideline. 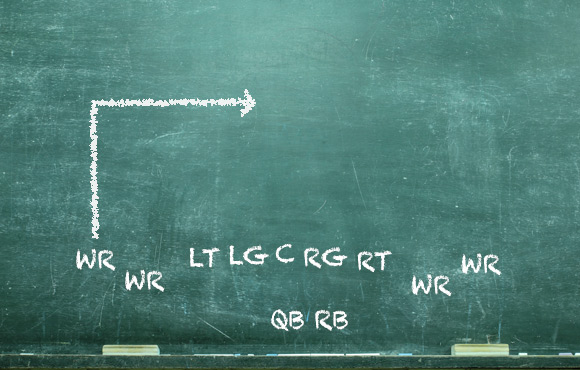 The dig route is an extremely popular route to be used beneath a series of vertical routes in hopes of creating an opening underneath. The receiver will typically push 8 to 10 yards up field, giving the appearance that he is running a "go," before breaking hard off of his outside foot and redirecting his path evenly across the field. 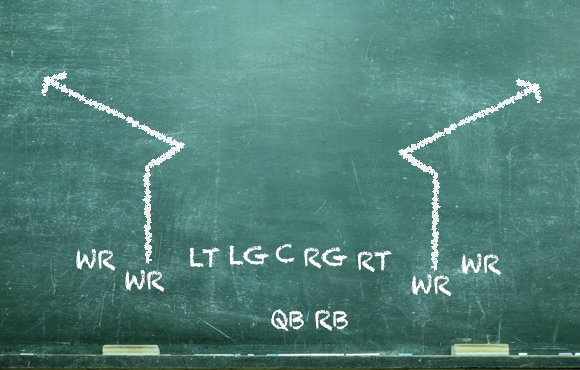 The post corner can be an extremely effective option against two high safeties in conjunction with an inside breaking route. The post corner—as its name would imply—is designed to look like a post route, with the receiver breaking towards the post at the same depth (eight yards) before abruptly changing course off of his inside foot back towards the corner pylon. 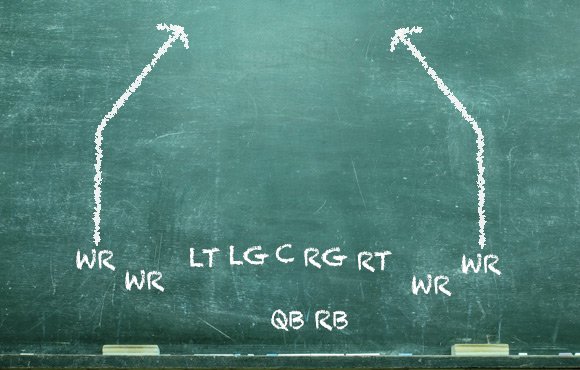 The post route is another extremely popular route in most offenses, particularly when trying to score quickly. Receivers will push up-field to eight yards, plant off of their outside foot and drive towards the goal post. Depending on the coverage, a post may be run flatter with a quicker throw, or "skinny" with a deep, high-arching throw. 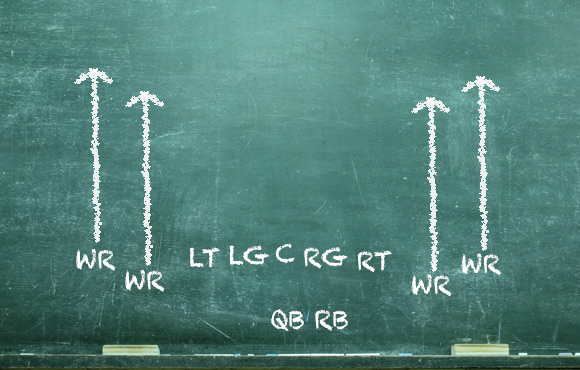 The simplest route in the book. Kids begin telling their friends to "go deep" during their very first game on the playground, and for good reason. There's no defense against speed. The go route is very simply that, as receivers will look to gain outside leverage off the line of scrimmage and out-run the defender to the end zone. 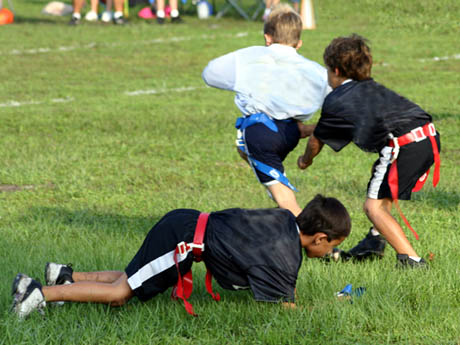