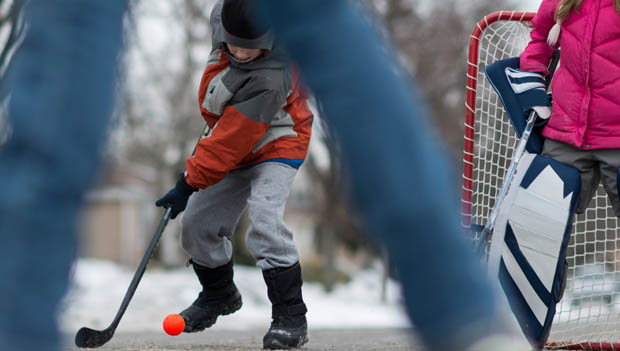 While time on the ice is necessary for a young hockey player's development, progress can certainly be made off of the ice as well. With that in mind, these off-ice hockey drills focus on gaining and maintaining possession and converting scoring opportunities.

This drill prioritizes the importance of individual players possessing the ball. Within a defined space, two players battle against one another to keep the ball on their stick. As soon as the drill begins, the instructor begins to count. As soon as the count reaches 20 seconds, the drill stops and the players relax. The instructor then selects two new players to battle it out inside the grid.

Keep Away, Take Away

In what is essentially an expanded version of the previous drill, players compete within teams to keep possession of the ball. After dividing into two evenly matched teams, set up a grid that is roughly twice the size of the space utilized for "20 Seconds." Have each player on one of the teams start the game with a ball and each player on the opposing team begin without a ball.

As soon as the instructor starts the drill, the players with the balls will try to maintain possession while the opponents try to steal a ball. Players should only attempt to take a ball away from players on the opposing team. At the conclusion of the allotted time, the team that has more players with possession of a ball will be declared the winners.

This drill will continue to focus on vision when in possession. As opposed to a single opponent, players with a ball will work to avoid multiple defenders by attacking space with speed. Players without possession should continue to utilize their speed as an advantage and defend in packs to regain possession.