When Should Kids Play Tackle Football? 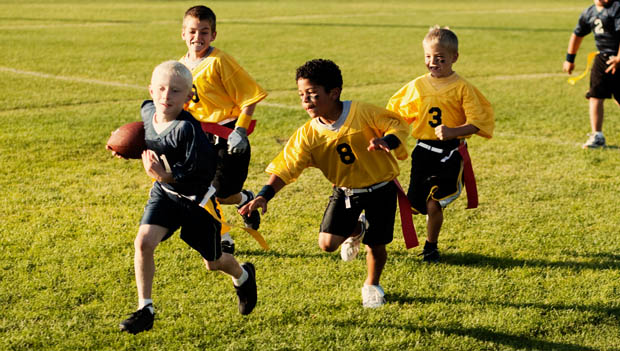 Since I was a kid growing up in Brooklyn, New York, I have been a football fan. It started as one of the few ways I could connect with my father, the two of us sitting in our living room groaning over the Jets.

In the ensuing years I learned the fundamentals of football and developed an appreciation for this game of inches. Football isn't "America's Pastime"—it's not a game you sit and watch while relaxing with a hot dog. No, football is a get-on-your-feet-paint-your-face-and-scream-at-the-top-of-your-lungs-for-three-hours game, and I love everything about it.

But despite my passion for it, there's no way I'd let my son play tackle football right now.

My son is eight years old, and currently shows no interest in playing any game that doesn't involve a controller. If, however, he decided that he wanted to play football, I would A) encourage him to be a kicker and B) put him in flag football until he was much older.

The effect of concussions on the mental and physical health of athletes is now well documented. Studies done on the brains of deceased professional football players show that the kinds of head injuries players receive can cause a condition known as chronic traumatic encephalopathy (CTE), which can lead to dementia, memory loss, depression and suicide.

The National Football League has finally acknowledged the connection between football and CTE and has been working on making the game safer for its players by introducing new helmet technology, focusing on leading with the shoulder in tackles and penalizing most incidences of helmet-to-helmet contact. But in football, like any contact sport, there is no way to make it risk-free without changing the game entirely. NFL players are aware of the risks, but choose to play anyway. They are adults, and they can do that. My son, however, is not.

As the mother of a young child, it is my job to protect him as much as I possibly can as long as he is under my care. That doesn't mean putting him in a bubble, but while he is still this young, it means protecting him from unnecessary risks. Unfortunately, tackle football is one of those.

There are plenty of parents who put their kids in tackle football, and I can't judge them because that's not my family and not my child. I love the game and would happily let my child play if he showed a passion for it, but while he is still growing and developing and figuring out what he likes and what he doesn't, I see no reason to take the risks that come with tackling.

When they get into their teen years, kids who want to continue and get serious about football should move to tackling so they can learn all the nuances of the game, as well as how to tackle as safely as possible. But before then, I don't see the point. I don't think kids lose all that much by not playing tackle football before the age of 14—the age some experts suggest is a good starting point for tackling. I just don't see any reason to take any chances before then.

At least, that's what I would do with my kid. But he's busy playing Mario Kart.

Find flag football camps and leagues near you.