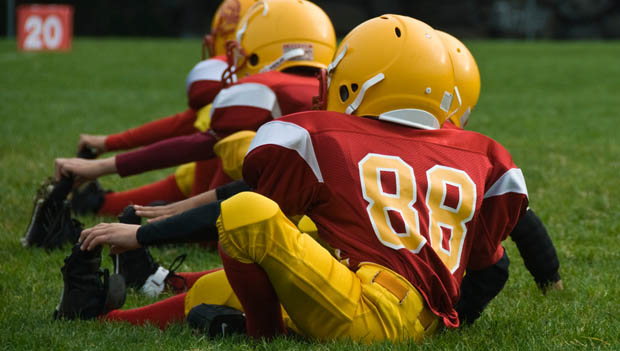 Before you can bask in the glow of the Friday night lights, you must put in the effort behind the scenes to make the team.

Are you ready for football tryouts this year? Read these tips from Mayville State University Running Backs Coach Jeff Saboe to help you prepare for the big day.

Adopt a "Never Ever Quit" Attitude

The motto of the Texas Rangers baseball team applies here: Never Ever Quit. If you're coming in last in a running drill, keep running as fast as you can. To a coach, a player who tries hard is more valuable than a stellar player with a quitting attitude.

"It doesn't matter if you trip over yourself and fall flat on your face, finish every drill and every play," Saboe says. "Technique can be taught, but attitude is up to the athlete."

Have a Short Memory

One minute after tryouts start, you may miss a field goal or bumble a catch. Let it slide.

"Everyone makes mistakes in sports, whether you're in middle school or in the pros," Saboe says. "Don't let one mistake compound into five mistakes. Shake whatever happened off and keep your head in what you're doing."

Peyton Manning didn't become a record-breaking quarterback in one day. He worked hard for years to become a household name. You won't wake up one day and become a successful athlete if you've spent the last month on the couch watching TV, but you will undoubtedly see improvement if you build on your athleticism continuously.

Swap the candy for veggies and make sure your protein intake is sufficient. Go on a run or lift weights instead of playing video games. On tryout day, your body will thank you.

Just because you aren't in math class doesn't mean you can throw your listening skills out the window at tryouts. If you can listen and learn the plays, you're halfway there. It's when you ignore the coaches that you find yourself in trouble.

Even if you're not in the drill, make sure to watch. Show the coaches you know how to be attentive. Chat with your friends during water breaks or after tryouts, but never while the coaches are talking.

Find football camps and leagues near you.