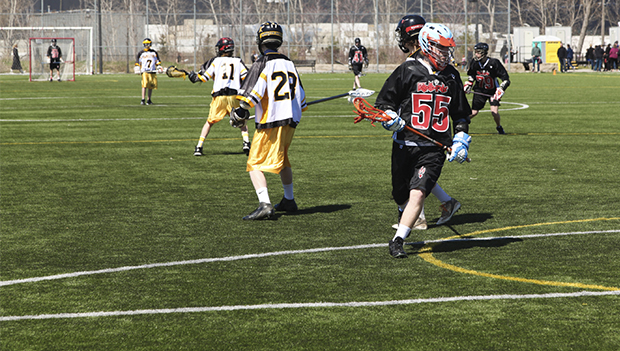 As I write this article, I am reminded of a great quote from my last interview with Coach Dom Starsia at Virginia, "We love to create lacrosse drills which you cannot anticipate the solution or how the drill will end."

By now you know we love fast-paced drills that more often than not have a fun transition element, and this is one of my favorites. We call it "Three & Go!"

In the simple form, we have three lines of offensive players, well actually four lines, as you will see. We also have three lines of defensive players. The thing I love most about this drill is the flexibility coaches. The lines (both offense and defense) should not be simply at the corners, but almost randomly scattered just outside the box, or behind the cage. It is equally important that the lines for offensive and defensive players are located in different places each day you run this drill. For example, you might have two lines behind and two on the same side of the box for the offense and be equally varied in where you may put the lines of defenders.

This a great coaching opportunity to focus on the fundamentals, players stepping 'to' when throwing a pass, as well as stepping into each catch, throwing and passing from the outside shoulder whether it be right- or left-handed. Or possibly only making each of the first three passes with a big roll away from the defense for the offensive player.

By the time we get to the second or third pass, the defenders are now in more of an individual coverage scenario on each of the three initial offensive players. Now we play 3v3 but upon completion of the third pass, the fourth offensive player quickly enters the drill, so we have moved to a 4v3 in an "add one" element to the drill. Now we quickly play to a shot. The coach is not blowing a whistle here; the fourth line player needs to pay attention and enter the drill on his own following the third pass completion.

If one of the first three passes is dropped, that group is done and immediately a new group begins with a new ground ball. This also a great way to reinforce the "ground ball-pass-pass" philosophy we hear so much from college coaches.

1. We can also use this drill to work on specific elements of our offense without slowing down the pace of practice. For example, we could set a rule that the first pass needs to be off an offensive pick or start the initial three-pass sequence off a pass and pick or even off an off-ball pick. Pretty cool, eh?

Now we have integrated our communication around picks in our defensive players into a fast-paced drill as well.

2. I also like to position the fourth offensive line up a the midfield line or out of the sideline substitution box or way out at the sideline at GLE just to mix it up and offer different looks, all directly related to true game-like scenarios.

3. Then one day, rather than have the fourth line as an offensive "add one" line, make the fourth line defensive players. So now it goes from 3v3 to 3v4 with an extra defender, again a great way to work on double-teams, take-a-ways, as well forcing the offense to really move both on and off ball to get a look at the cage.

Keep the lacrosse drill moving quickly, and players will have a blast. Be creative, let the players multi-task, and you will see results.