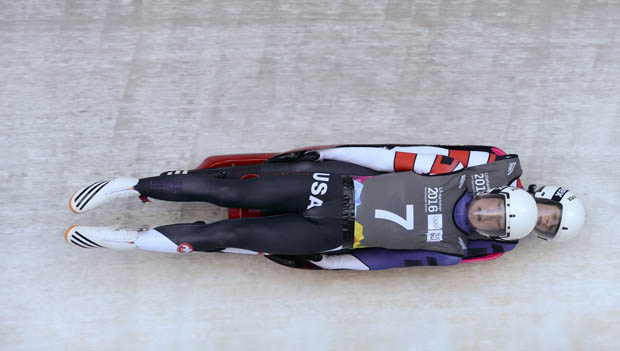 A child taking over the family business is part of the quintessential American Dream. The idea of establishing a family legacy and passing on a craft from one generation to the next brings unparalleled joy to some.

For Jon Owen, that craft was sliding down a 1,300-meter ice slide at speeds up to 90 miles per hour.

Owen represented the U.S. in the men's luge at the 1988 Winter Olympics in Calgary before joining USA Luge as a development coach in Park City, Utah, site of the 2002 Winter Games. So when his son, Alanson (above), said he wanted to give luge a try at age 7, Jon was uniquely qualified to show him the ropes.

Establishing luge as a family tradition was never something Jon wanted to pressure his son into.

"We let him discover it on his own," says Jon, now the Western Regional Program Director for the sport. "We weren't going to force him into anything he didn't want to do. We never pushed him to slide, but obviously he grew up around the sport."

Alanson's interest in the sport was practically inevitable. His mother—also a former luge athlete and alternate for two Olympics—was in charge of running the 2002 luge competition for the organizing committee in Salt Lake City, which meant Alanson was exposed to the sport at its highest level before he was even 2 years old.

"On an Olympic venue everybody has their own call sign on the radio and his call sign was 'Diaper One,'" Jon says. "He had his own official Olympic credential—because you can't get on-venue without your photo ID—so he was the youngest credentialed person at the 2002 Olympics."

Alanson admits that hearing stories about his dad competing fueled his initial interest in the sport. Now 15 years old, he'll also get the opportunity to represent the U.S. at the Youth Olympic Games in Lillehammer, Norway from February 12-21.

"I think it'll be a very cool experience and it means a lot to me [to represent the USA]," Alanson says. "It'll just be really cool to be there and get to meet everyone and have a new experience."

As a father, Jon wants to make sure Alanson take full advantage of the Youth Olympic Games' athlete participation programs, which focus on building cross-cultural connections among competitors.

"We try to point out, 95 percent of the kids in this country can't even conceive of doing something this cool," Jon says. "We want him to take advantage of what he has here in front of him because it doesn't come along every day."

While Alanson is focused on this year's Youth Olympics, his long-term goal is to compete in the senior Olympic Games, just like his dad.

"It would be a really big accomplishment for me," Alanson says. "I would be incredibly happy and I think my parents would be proud and that'd just mean a lot to me."