How I Taught My Daughter to Appreciate Nature 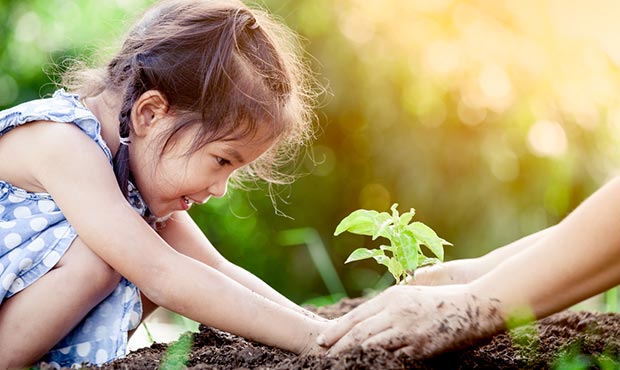 My daughter was born in late September, right before a long, cold winter. The first few months of her life were spent indoors, swaddled in blankets, keeping warm and growing stronger.

When it finally turned spring, we went outside. We’d go hiking or have a picnic at the park. Sometimes we’d sit in the grass for an hour, just to feel the dirt between our toes. As a new mom, I didn’t know what I was doing. But when I took my infant daughter outside, I felt certain that I was doing something right.

In my daughter’s eyes, the point of hiking isn’t reaching a mountain summit but discovering treasures along the way

My daughter is 2 1/2 years old now, and she regularly hauls her little body up mountains, a toddler-sized hiking stick clutched in her hand. When we hike I don’t tell her to be careful. I don’t warn her against tripping. I don’t tell her not to run. Instead, I ask her to pay attention. And she does pay attention. She sees things that would have otherwise escaped me—a salamander darting across our path, the purple flash of a Larkspur beginning to bud. On the trail, she’ll squat to dig rocks from the dirt. In my daughter’s eyes, the point of hiking isn’t reaching a mountain summit but discovering treasures along the way.

This curiosity about the natural world wasn’t something I needed to teach her, but it was something that I had to give her access to. In some ways this is easy, because I love the outdoors. But it is hard, too, because adventuring with a toddler is a recalibration of the way I spend my time outside. Everything happens at a slower pace with a toddler in tow. Instead of racing upward to take in a vast mountain vista, I stop to watch a fuzzy caterpillar inching its way across a green leaf. There are times I wish I were pushing harder, moving faster. Then again, when was the last time I sat still and watched a caterpillar get where it was going?

Now that she’s older, we head outdoors in snowstorms and heat waves alike. We hang bird feeders and plant pollinator gardens, and we talk about the magic of butterflies and bees. My daughter wears her rain boots everywhere, because who knows when there might be a puddle to jump in. I don’t discourage her from getting muddy or dirty; I just keep two changes of clothes at the ready.

I take my daughter camping and make shadow puppets with the light thrown from the campfire. I teach her about the nighttime sounds and the constellation of stars in the sky. I want her to know that darkness is not to be feared but anticipated. It ushers in new thrills: a glowing moon, croaking frogs and blazing stars.

I do all of this because I know what we face in the future— smart phones and screen time, the cultural lure of the indoors. We live in an age of nature deficit disorder. We live at a time when parents are arrested for letting their children walk to the park alone. No matter what kind of world my daughter grows up in, I want her to feel like the natural world is a place she can always come home to, a place that offers solace and holds an endless array of wonders.

So, we continue to dig for worms. We look at bugs with a magnifying glass. I say, “Isn’t that grasshopper cool? Isn’t that spider beautiful?” We tap roly poly bugs to see them curl up in a ball, collect rocks shaped like hearts and twirl our fingers through golden flecks of dirt. My daughter holds a juicy earthworm between two chubby fingers. “Look mama,” she says, “this worm is awesome!”

I squint at my daughter as the worm dangles from her hand. Her smile lights her face like a blazing sun on a cloudless day. I say, “Yes, baby, it certainly is."

READ THIS NEXT: Beginner's Guide to Family Camping