Judges: The men and women in navy suits and white shirts at competitions who evaluate a gymnast's routine.

Jump: A dance skill where a gymnast propels his or herself into the air, taking off from the ground with two feet and landing with two feet. Jumps can involve twists and different body positions in the air, but do not involve rotation. Some examples of jumps include wolf jumps, straddle jumps and sheep jumps.

Layout: A body position where a gymnast's body is completely straight from head to toes, or in some cases, slightly arched. The layout position can be shown in jumps and flips.

Leap: Generally, a dance skill where a gymnast takes off with one foot and lands with one foot, moving forward in the process. Examples of leaps include split leaps, switch leaps, side leaps and ring leaps.

Leotard: The outfit gymnasts wear to do gymnastics. Girls typically wear a leotard without sleeves to practice and one with long sleeves for competitions. Boys' leotards, or singlets, involve more pieces: the singlet, pants and socks (worn for pommel horse, rings, pbars and high bar) and shorts (worn for floor and vault). However, for practice, boys typically wear shorts and a T-shirt.

Meet: The general name for the competition in gymnastics. Do not use game. Similarly, gymnastics "do" gymnastics rather than "play" it.

Mount: The skill used to get on the apparatus, or, on floor, the first tumbling pass in a routine.

Olympic Order: The order of events a team or individual will rotate in during a competition. Girls rotate from vault to the uneven bars, to balance beam and finish on floor exercise while boys rotate from floor to pommel horse, to still rings, to vault, to parallel bars and finish on the horizontal bar.

Out of Bounds: While performing a floor routine, if a gymnast steps past the white line on the floor mat—stepping on the line is fine—he or she is considered out of bounds. If this occurs, it is a one-tenth deduction off the final score.

Parallel Bars: Similar to the girls' uneven bars, an apparatus that involves two fiberglass bars that are parallel to each other. Also known as pbars, they must always remain parallel, but can both move up and down or in and out to accommodate the individual gymnast's needs. Only boys compete on pbars. 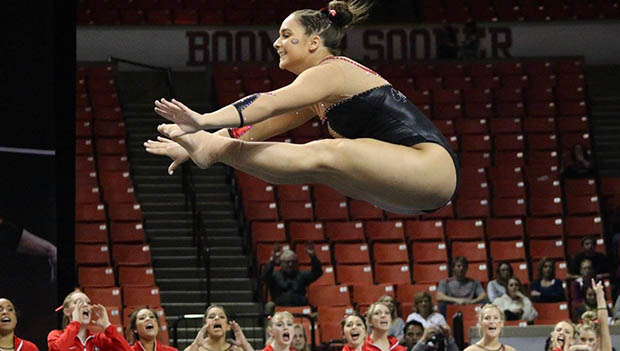 Pommel Horse: Also referred to as pommels or horse, this apparatus involves a large wooden horse-like shape, covered in leather with two handles on top. Only boys compete on pommel horse.

Rhythmic Gymnastics: A discipline of gymnastics that combines flexibility, dance and expression on its various apparatus. Rhythmic gymnastics events include hoop, ribbon, ball and clubs.

Runway: The long strip of foam or carpet stretching in front of the vaulting table and springboard. The runway is typically around 80-feet long and is accompanied by a tape measure indicating where gymnasts start their run for their vault.