Salto: The official term for a flip. Saltos refer to skills that involve flight, including skills such as handsprings, round offs and flips. 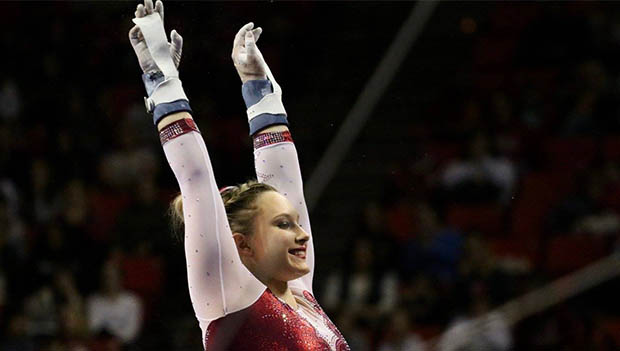 Salute: A movement a gymnast does toward the judges before and after a routine. Girls typically raise both arms straight up near their ears in a Y shape while boys raise one arm.

Scoring: How a routine is evaluated. Scores are given out by judges and range from 0 to 10, with a 10.0 being a perfect score. In levels 1-10, scores start from a 10.0 and deductions as small as half a tenth or as large as one whole point—depending on the severity of the error—are then taken from the total.

Skills: The elements performed in a routine, such as a cartwheel, handstand or back handspring.

Springboard: The wooden wedge-shaped object that sits on the ground in front of the vault. The board consists of two sections of wood with anywhere from three to seven springs in between and covered by leather, thin carpet or basketball material on top. When vaulting, gymnasts will run down the runway, jump on the springboard and propel themselves onto the vault, flipping off the table. Gymnasts can also use the springboard to mount bars or beam.

Stick: When a gymnast lands and there is no foot movement—as if the feet are glued—or stuck—to the ground.

Still Rings: An apparatus consisting of two wooden rings, hung from either a rig or the ceiling by wire and fabric. While they can swing back and forth, the objective of the event is to keep the rings as still as possible while performing strength-holding skills. Only boys compete rings.

Straddle: A body position where a gymnast's legs are straight out to the side of their body. A straddle position can be shown in leaps and jumps.

Trampoline: Not your ordinary backyard trampoline, this gymnastics discipline involves athletes bouncing as high as 30 feet in the air while doing skills involving multiple flips and twists. Recreation-level gymnasts just starting out use the trampoline to learn air awareness and balance in a safer environment. Other categories in the trampoline and tumbling discipline include double-mini trampoline and power tumbling.

Tuck: A body position where a gymnast's legs are bent at least at a 90-degree angle and the legs from the hips to the knees are parallel to the ground. A tuck position can be performed in jumps and flips.

Turn: A dance skill where a gymnast spins around on one foot. Turns can be performed with various leg positions and with various degrees of rotation. Common examples of turns are pose turns, L-turns, Y-turns, attitude turns and wolf turns.

Uneven Bars: Similar to the boys' parallel bars, an apparatus that involves two fiberglass bars—similar to what you would see in a ballet studio—that are parallel to each other. However, unlike pbars, one bar is low and one is high. This equipment can be adjusted so the bars are farther or closer to each other, as well as higher or lower. Only girls compete on the uneven bars.

Vault: An apparatus resembling a table or a large tongue, covered in leather. The table has the ability to be raised and lowered depending on the size of the gymnast using it. An older version of the vault more closely resembled a pommel horse with no handles. Both girls and boys compete on this event.

Ready to flip? Search for a gymnastics class.