Growing the Next Crop 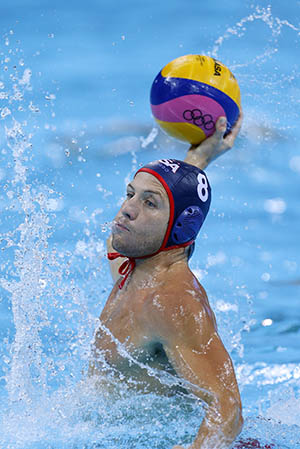 While Azevedo continues to work toward his goal of winning a gold medal for Team USA (they won silver in Beijing in 2008), he's also following his father's footsteps in another way by doing his part to prepare the next generation of water polo players.

"Now I've taken over his camps and do the same thing [for young players] because I feel like it made such a difference in my life," Azevedo says.

In addition to conducting camps and clinics, Tony founded Azevedo Water Polo with his father and sister, Cassie (who also plays professionally). The company organizes customized training programs in Italy and Montenegro to help expose young American players to the highest levels of the sport.

"What made me who I am today is not only having my father as a role model, but was having the opportunity to see such high levels of water polo around the world and to get the opportunity to go to these camps and talk to great athletes," Azevedo says. "I know to this day that was such a big influence on my life."

Back to His Roots

Besides getting the chance to play in the city of his birth, the 2016 Olympics also represent a special opportunity for Azevedo: This will be his first Olympic games as a father.

His son will be three years old this summer and Azevedo is excited to share the experience with him.

"Before I was just going out and playing, doing what I do every day, but now everything I do he watches, understands and learns from," Azevedo says. "Being a role model to him is really fulfilling."

But his son isn't the only family member who will be getting to watch him compete at the Olympic level for the first time when he returns to Rio.

"I've never really gotten to play in front of this many people in my family at this level," Azevedo says with a laugh. "It's funny now going back and there are so many people coming out of the woodworks, family members I didn't know I had."

Even though he'll be proudly representing Team USA as he chases his dream of winning a gold medal, Azevedo is also looking forward to celebrating his heritage in the country of his birth.

"The opportunity to play and represent my country in the city of my birth is so exciting," Azevedo says. "I feel so lucky that it's kind of like I'm playing for two homes."

Find camps and clinics for kids near you.