Chloe Kim (above) and Hailey Langland are your typical teenage BFFs. They've been friends for years, and they share several common interests.

One of those interests just happens to be snowboarding—and they both just happen to be ridiculously good at it.

At just 15 years old, Kim and Langland are widely considered to be the future of U.S. women's snowboarding. That implication can be a little misleading though, since they've both already started collecting some serious hardware.

The Future is Now

In January 2016, Kim participated in her third X Games, winning her second straight Superpipe gold medal after becoming the youngest athlete to win gold in X Games history in 2015. She says the wins represent the greatest accomplishments in her blossoming career. 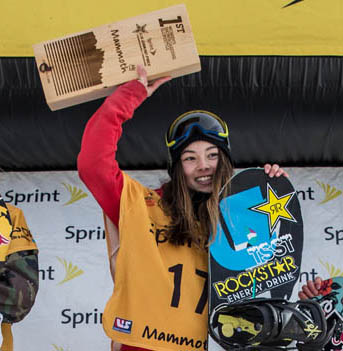 "Nothing can really top the X Games results [so far], because it's one of the biggest contests," Kim says. "It's also where the best riding goes down, so it's such an honor to just be there and ride with such crazy-talented women."

Meanwhile, Langland made her first X Games appearance this year and managed to land on the podium as she took home bronze in the Slopestyle event. That came just a year after taking first place in her first major pro event, the U.S. Grand Prix at Mammoth Mountain in 2015 (right).

"I got lucky enough that I put down a good run and got just a few points higher," Langland says of her Mammoth Mountain win. "It was really just an awesome experience to even be riding with such talented girls."

It's not necessarily surprising that two of the best young snowboarders in the country would be such good friends. They're the same age, share the same passion and frequently participate in the same competitions.

But in the case of Langland (below) and Kim, the friendship dates back long before either athlete burst onto the competitive scene.

The Southern California natives grew up less than an hour away from each other, and while snowboarding did play a role in the formation of their friendship, they had no way of knowing they'd both reach such extraordinary heights.

"I didn't pick Hailey as my friend because we were both doing all these pro events," Kim says. "I've known her since I was very young. It's cool to have a friendship like that, not because we're both going to the same contests, but because we have the same passion, and we're from the same area."

The next stop for Kim and Langland is Lillehammer, Norway, where they'll both represent the United States at the Youth Olympic Games from February 12 to 21. Both young women say they're honored to be able to represent their country. 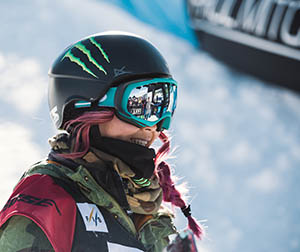 "I think it's going to be a really big step in my career," Langland says. "Seeing how I can do [at the Youth Olympic Games] would put me in a position to prep myself for the [senior] Olympics."

With the next Winter Olympics still two years away, Kim and Langland know they have plenty to prove between now and then.

"If I am able to go [to the 2018 Olympics], it's going to be a dream come true," Kim (left) says. "Obviously there's a lot going on beforehand, and I want to focus on those things."

For now, that focus will be on bringing home gold medals for Team USA. But don't be surprised if they're focused on that same goal two years from now on an even bigger stage.