Is Running While Pregnant Safe? 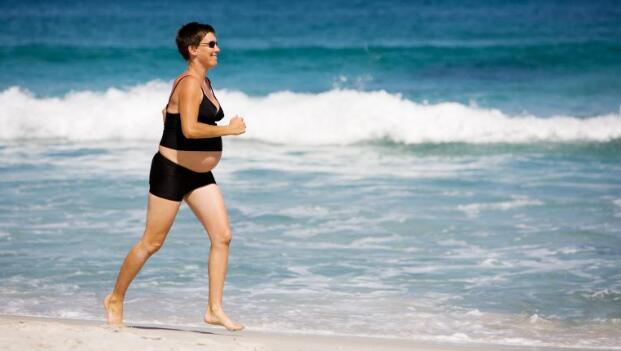 Amber Miller ran the Chicago Marathon at 39 weeks pregnant and then had her baby hours later.

Before a hearty "You go girlfriend!" let's think this one through.

Clearly, Miller is in excellent shape, a physical outlier. This is not about her. She is probably too busy to read this anyway, with a newborn consuming her every waking moment. Moms everywhere know she will be lucky to sneak in a shower with all that's been going on since crossing the finish line. So congratulations to her and let's move on to the unfortunate benchmark she has set now that this is a national story.

Pregnant women everywhere—with their swollen feet on the ottoman, perhaps a stash of anti-nausea Preggie Pops on the counter, maybe leafing through a catalog of shudder-inducing nursing bras—can now be certain that they are utter losers, choosing to let their unborn child get in the way of personal fitness goals. Not to mention the unpregnant slackers who haven't even attempted a marathon.

I can see how the story could be heroic. Say a mother needed to cross Kenya's Mara River before a drought, following the Wildebeests so that her baby would have food. Wasn't that in "The Lion King"? Anyway, a marathon is an entirely recreational race. There is no imperative here, and the application fee doesn't count.

Sixty years ago, a doctor may have told a woman not to get out of bed during her pregnancy, drugged her during labor, used forceps to get the baby out and then suggested that she not spoil the child with physical interaction or eye contact.

Thank goodness times have changed. Dr. James Moran, chairman of obstetrics and gynecology at Saint John's Health Center in Santa Monica, California, and a clinical professor at USC, said exercise during pregnancy is beneficial and lowers the chances that a mother will be diagnosed with diabetes. Women actually have choices about how they want to approach their birth and pregnancy and are encouraged to exercise.

Specifically, it's recommended pregnant women do a half-hour of moderate exercise every day, so stop giving them the evil eye in the gym. Professional marathoner Paula Radcliffe won the New York City Marathon in 2007 when her daughter was 9 months old, and she trained during her pregnancy.

"I can see why [Miller's] doctor gave her permission because she did one at 19 weeks, and that was the one I'd be more worried about," Moran said.

Physically at 39 weeks, Moran said there isn't a lot of additional risk to the baby. If she went into labor, it wouldn't qualify as premature. Certainly running a marathon at that stage is riskier than not running a marathon, but Moran doesn't think she put her baby in real danger.

Radcliffe is just one mom paving the way. We've reached a point where Kim Clijsters can have a daughter and win another major in tennis. Women no longer have to give up dreams of being elite athletes after having babies. The idea that our baby-making machine gets in the way of being a champion or our uteruses will fall out if we break a sweat is thankfully outdated.