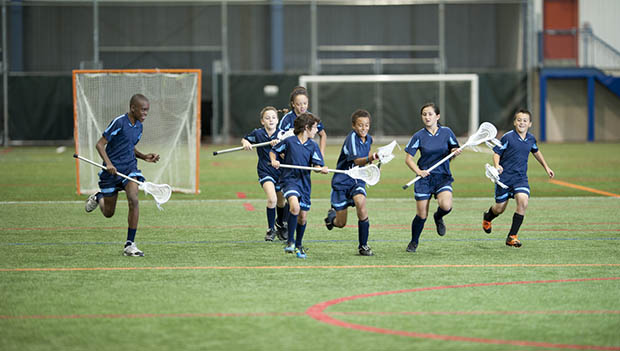 The beginning of a new school year is just around the corner and with it, the fall sports season begins. Soon parents will be tasked not only with buying the annual haul of school supplies but also with signing their kids up for their favorite fall sports. Whether your child prefers to play the same sport year after year or is more interested in trying something new this fall, the following sports are among the great options offered.

A wonderful choice for young kids who've never played on a team before, soccer is a popular introductory fall sport. Younger children typically play on co-ed teams and learn the fundamentals of the sport without the stress of competing against one another in games. As they age, players are generally divided into same-sex teams and play against each other in half, and eventually full field, games.

Cross country is a sport that is generally introduced in middle school, though youth running leagues do exist across the country. The sport is great for any child with a love of running, as teams and individuals race outdoors over varied terrain and in all kinds of weather in an effort to cross the finish line the fastest. Cross country is considered both an individual and team sport, as runners are judged on their personal times as well as team times.

A fall sports classic, for many people football marks the beginning of the change of seasons. In most school districts, football is offered as an afterschool sport beginning in middle school, though there are many youth football leagues for kids who want to get started earlier than that. Generally, the youngest footballers start off playing flag football before moving up to full contact tackle football.

If your child loves the ice, ice hockey is a fast and fun sport that takes place during the fall and winter months. The sport is usually played indoors on an ice rink, and the purpose is to place the hockey puck in the back of the opponent's goal. The sport has many similarities to soccer, but ice hockey players move the puck using hockey sticks (as opposed to moving the ball by kicking it) and dart back and forth on the ice on ice skates.

Cheerleading is a sport that takes acrobatic talent (flips and stunts), as well as the balance, timing and grace of dancing. While the purpose of cheerleading is to support other sports squads, cheering is also a competitive sport. If your child is drawn to high-energy pursuits like tumbling and dancing, cheerleading might just be the sport to try this fall.

The oldest sport native to North America, lacrosse is easy to pick up and is growing each year in popularity. In fact, over the past twenty years it has been the fastest growing team sport. On the lacrosse field, each player has a stick with a net on the end that is used for catching and throwing a rubber ball. The purpose of the sport is to put the ball in the back of the opposing team's net and score a goal. Though women's lacrosse is a non-contact sport, contact is allowed in men's lacrosse, requiring additional protective equipment.

Depending on school district, golf may be a spring or fall sport. No matter when the game is played, golf requires the ability to concentrate and maintain mental and physical balance while striking the ball with a golf club toward a distant target. Aside from the social and physical benefits of the game, another major upside to golf is that your child should be able to competitively play the sport late into life.

Field hockey is a sport that dates back to the ancient Greeks and is one of the oldest team sports in the world. While field hockey has predominately been a women's sport in the United States, the sport is popular with both male and female athletes around the world, and men's field hockey has been gaining popularity in the U.S. in recent years. Field hockey is played on grass or turf and is much like ice hockey without the ice. If your child is signing up to play at school, field hockey is usually offered beginning in middle school.

If your child is looking for a team sport that's big in action but low in injury, volleyball is a great option. Girls' volleyball is offered as a fall sport (boys' volleyball usually takes place in the spring) and is played in intimate teams of six who work together to keep the ball airborne on their side of the net and grounded on the opposite team's side. Like golf, volleyball is a sport that can be played and enjoyed well into adulthood.

Boy's water polo is played in the fall (girl's is typically played in the spring) in a swimming pool. The purpose of the game is to throw a buoyant ball into the goal of the opposing team. Athletes need both speed and strength to keep their bodies above water and engaged with the game, and the sport is a great cardiovascular workout. For kids that are drawn to the water but prefer a team atmosphere, water polo is a great sport to try.

READ THIS NEXT: 10 Reasons Rec Sports Are Great for Kids