The Benefits of Sports for Girls 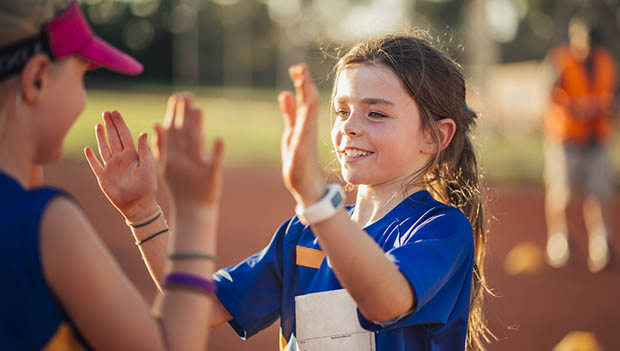 Youth sports are not just fun to play and watch, they provide important physical, psychological and social benefits for kids as well. We all know the importance of physical activity for a healthy lifestyle, and in fact, kids who play sports are less likely to develop chronic health issues like obesity and type two diabetes and are more likely to maintain an active lifestyle through adulthood. But the benefits of sports, particularly for girls, reaches far beyond working up a sweat, and these benefits are seen across female athletes of all skill levels.

Arguably nothing has done more for girls' sports than the landmark Title IX legislation in 1972. Before Title IX, one in 27 girls played sports. Today that number is two in five. There has been a 545 percent increase in the number of women playing college sports and a 990 percent increase in girls participating in high school sports.

Girls who play sports reap the rewards of improved fitness and maintaining a healthy weight, plus they are less likely to smoke and have a reduced chance of getting breast cancer and osteoporosis later in life.

High school girls who play sports are less likely to be involved in sexual activity or experience an unintended pregnancy.

Girls of all grade levels who participate in sports report a more positive relationship with body esteem, particularly among girls who played three or more sports per year.

They are more likely to describe their health as "excellent," perceive their academic and athletic ability in a better light and have lower rates of depression and suicidal tenancies than girls who are not active.

Girls who participate in sports are better at organizing and time management, skills that are helpful for success later in life.

Female athletes are better students and show a stronger commitment to their studies. One study showed exercise improves the academic performance of teenagers, and it particularly benefited girls' performance in science.

High school female athletes are more likely to want to attend college, and have lower dropout rates, especially for white females in suburban and rural schools and Latina athletes in rural schools.

Being on a sports team gives girls a chance to build a new social network and develop friendships outside of school. By training together and winning and losing together, girls learn teamwork and a sense of belonging.

Playing competitive sports has a transformative influence on one's life. Confidence surges with winning, of course, but losing may be even more impactful for building self-assuredness. Working through struggles, continuing when it seems impossible and putting in the hard work to reach a goal are the experiences that build emotional fortitude.

In fields heavily dominated by men, female athletes are a key building block to gender equity in the workplace.

Women who play sports, particularly at an elevated level like this, come to the workforce with highly transferrable skills that are valuable assets to business and industry.

And employers know this. A survey of 400 female executives from four countries showed that two out of three responded that a candidate's background in sports would have a positive influence in hiring decisions.

In fact, employers are willing to pay a premium for former athletes, giving them on average 7-percent higher wages  than non-athletes.

So it's no surprise that among female executives in Fortune 500 companies, 80 percent played competitive sports at some point in their lives and 95 percent of the female chief officers in those companies played sports.

Girls who play sports get the opportunity to be part of a team, work together, push themselves and each other, dream boldly and achieve shared success. They are healthier, happier and have more success into adulthood. One of the best ways to support girls is to encourage and champion their participation in youth athletics. Plus, sports are just plain fun!

READ THIS NEXT: 7 Benefits of Team Sports for Kids