'90s Trends From We Wish Came Back Now 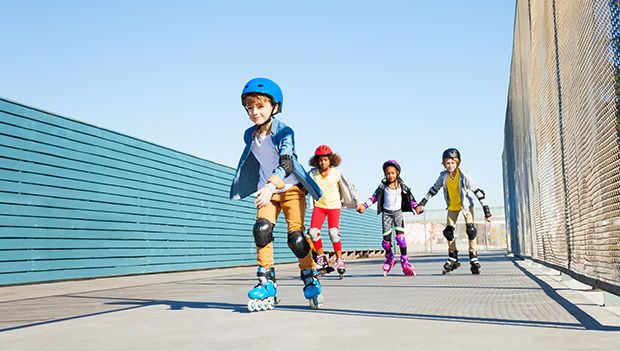 Saying "back when I was a kid" certainly doesn't make us feel any younger, but it's all too easy to find yourself recalling something you absolutely LOVED as a kid and wish you could share it with your own. The real conflict comes when the trends of our day don't match those of our kids', and the things we loved are no longer "cool".

Out of nostalgia and fun, we've put together this list of things from "way back when" (other than Beanie Babies and Pokémon Cards, of course!) that we'd love to see grow popular again so that today's kids can experience some of the same joys, thrills, styles and activities we enjoyed "back when we were kids."

You couldn't really be a kid of the '90s without attending a party at the skating rink. Many of us probably got a pair of inline skates as a gift at some point as kids—complete with the helmet, knee pads, elbow pads and wrist protectors. While laps around the rink to the original Space Jam theme song may be a thing of the past, it's not entirely out of "fashion" to add a new pair of inline skates to your kid's active gear.

Remember the days when you had all your closest friends' phone numbers memorized? There are probably phone numbers that are still catalogued into your long-term memory from your childhood! Oh, the days of holding up the line with preteen drama and knowing the number to call to see if our friends could come over to play. While handheld devices include a built-in phonebook and landlines are rapidly becoming a thing of the past, it's never too late to memorize a phone number or two. Set the digits into a memorable jingle for your kids, and who knows, when the phone battery dies, it may save them a lot of stress!

Yes, the viral dance of the '90s—love it or hate it, you know it, and well, your kids probably don't. They probably know (and possibly taught you) viral dances of their childhood decade ("flossing" or "Gangnam style" come to mind), but learning yet another childhood viral dance never hurt anyone. In fact, it might be a great family bonding experience! Afraid you forgot the moves? Pull up YouTube, and do a quick search—not only will you find the song, but the left hand, right hand sequence will come running back to you quickly. Your kids are sure to get a kick out of it (and possibly run along to teach their friends, too)!

With the Nerf Vortex football (which is still being updated and sold), it's not so much the item itself that we miss as its initial fame. It was hard to find a neighborhood that didn't have a Nerf Vortex football throwing contest going on in the middle of the street back in the '90s. Whether you first saw it thrown by John Elway on a Nickelodeon channel commercial or by your older cousin at the neighborhood park, its initial impact was amazement and the immediate hope that you, too, could throw it as far as you'd seen. While we might not have been as pleasantly surprised as our initial attempts had promised, we kept trying. And it's not too late for your kids to try, too! As mentioned, these are still being marketed and sold—start a throwing contest with your kids today.

When it came to learning the steps for self-grooming and style, these two '90s fashion trends took us as kids from having mom, dad or an older sibling help us do our hair, to styling our own dos. Butterfly clips made it easy to pull your hair back out of your face (especially when growing out your bangs) without needing to call for help in slicking back a bump-less, fly away-less pony tail—the more, the better!

And the spikey hair style made a somewhat messy, kid-achievable hairstyle "in" with the quick application of some gel. While we may not be in any hurry to re-embrace these fashion trends for their appearance, it is hard to beat a style that gives kids a little more independence and motivation to get themselves groomed and ready for the day. Perhaps it's worth a try!

Blockbuster, Wherehouse, Borders or your local video/music store, every '90s kid's memory can be jarred to recall some memory of these near-forgotten stores and the media and entertainment they provided for us. Perhaps it's scrolling through the endless options on every application on your family's smart TV and wishing something would force a selection sooner than later (like the store closing time), or maybe it's the envelope of CDs collecting dust in the corner of your garage. Whatever it is that draws back these memories, it's hard to talk to our kids about movies and music without coming upon that "when I was your age" line and having some version of a hard-luck, nostalgic tale to share. Don't forget to tell them about the smiley face sticker on every VHS film saying, "Be kind, rewind." We wonder what the stickers would say if these stores were still around for our media today?

Oh, the competition! We end this list with an item that meets the mark as a '90s trend that actually had a comeback in 2020: Bop-It! This toy from our childhood might've been one of the more stress-inducing items in the house, but we just couldn't put it down (until, perhaps someone threw it through the wall). The rhythm, voice and sound-effects of the original version were the background to many playdates, birthday parties and family gatherings.  Today's version might not look (or sound) exactly the same, but you'll love revisiting this old game with your kids.

READ THIS NEXT: The Freshest '90s Kids Movies