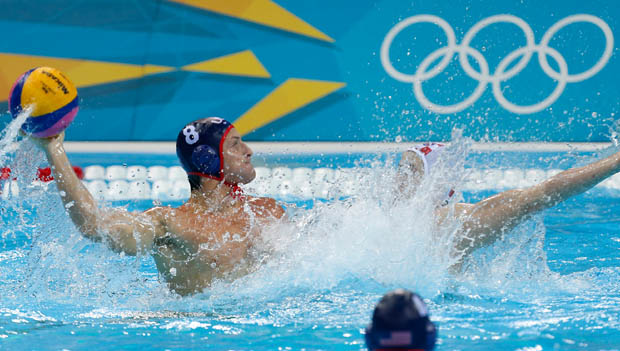 With the 2016 Olympic games approaching, countless Team USA athletes are on the "Road to Rio" as they seek to qualify for this summer's competition in Rio de Janeiro, Brazil.

For the journey of U.S. Water Polo captain Tony Azevedo, "Return to Rio" would be a more appropriate title, as the four-time Olympian prepares to represent the country he calls home in the city of his birth.

Although Azevedo was born in Brazil, his family moved to southern California when he was just one month old. Now 34, Azevedo is training to represent Team USA at his fifth Summer Olympics in a host city where his family roots run deep.

Roots in the Water

At first glance, it would seem Azevedo was genetically predisposed to become a water polo star. His father, Ricardo, played on the Brazilian national team before becoming one of the most respected water polo coaches in the world, going on to coach the national teams of USA and now China.

Naturally, the younger Azevedo spent much of his youth at the countless water polo camps, clinics and practices his father conducted. But Tony's attendance wasn't necessarily intended to get him more time in the pool so much as it was a means for Ricardo to spend less time on the road.

"He would take me and my sister so he could drive in the carpool lane and didn't have to sit in traffic," Azevedo says. "We would wake up at five in the morning and drive all the way out to Los Angeles and do these camps with him, and I just remember having such a great feeling."

Azevedo's early exposure to water polo grew into a lifelong passion, but he believes part of the reason he fell in love with the sport was because it was his decision to make.

"I played tons of sports when I was a kid," Azevedo says. "I feel like if I was told at a young age, 'This is the only sport that you're playing,' I would be very one-dimensional athletically, and I feel like I might've gotten burnt out and overrun some of my muscles."

With grandfathers on each side of his family tree who played professional baseball and soccer, Azevedo had no shortage of athletic interests. But when the time came to choose one sport to focus on, he ultimately decided to follow his father's footsteps into the pool; a decision that obviously turned out well for the four-time Olympian.

"I've been playing [water polo] at a high level for 18 years, and it's because I love it, and it was my decision," Azevedo says. "It was my decision that I wanted to go to the Olympic games and win a gold medal."