Video courtesy of Wellness in the Schools

There are 1,696 players on active rosters across the National Football League.

It takes determination, dedication and elite athleticism to play at football's highest level. So when Muscle and Fitness deemed former New York Giants punter Steve Weatherford "the NFL's fittest man" last year, it was kind of a big deal.

"For a magazine as highly-regarded as Muscle and Fitness to give me that title was very satisfying to me," Weatherford said in a recent interview with ACTIVEkids.com, "That magazine was really what inspired me to start weight training and to start to build my body into an athletic machine."

I don't want my kids to ever think they're working out. I think it's more about making fitness fun.

The 10-year NFL veteran recalls being a 108-pound high school freshman B team player when he turned to the magazine to learn more about training and nutrition. The knowledge he gained, combined with an insatiable work ethic, helped him pursue an active lifestyle that later led to a college scholarship, a chance to play in the NFL and eventually win a championship with the New York Giants. 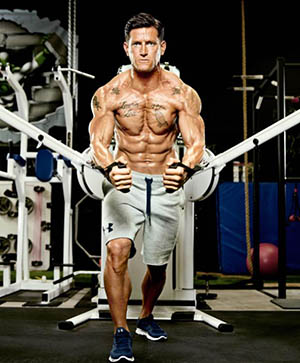 As a father of four, Weatherford hopes his pursuit of fitness will rub off on his children so they too can lead healthy, successful lives. He knows the best way to accomplish that is to lead by example, but he admits he can't be the lone role model for his son and three daughters.

"Strong is beautiful no matter if you're a man or a woman, so as important as it is for my children to see me doing it, I want them to see their mother doing it as well," Weatherford says. "I want them to see her investing in her health just to be healthy—not for magazine covers or because she plays a pro sport. I think when they see that it becomes normal for them."

According to the former NFL champion, leading by example is just part of the recipe for keeping his kids active.

"I don't want my kids to ever think they're working out. I think it's more about making fitness fun," says Weatherford. "We do our best to have our family fitness fun nights on Friday and try to stay as active as we can."

The Weatherfords split their time between homes in San Diego and New Jersey. While Weatherford admits it's easy to keep the kids active in the California sunshine, returning to the East Coast for football season makes outdoor activities a bit more challenging. One of the family's go-to solutions is a local gym with an indoor obstacle course the kids can wear themselves out on.

Besides teaching his kids the value of a healthy lifestyle, Weatherford says being active together helps bring the whole family closer. He compares time with family to money, saying you yield greater returns when you invest time in each other, as opposed to simply spending time together.

And Weatherford applies that same principle to other children with his philanthropic efforts. He hopes he can help inspire underprivileged children by speaking to them at schools and sharing his story of transformation from freshman B team player to NFL champion.

Before the school year started, he took a busload of at-risk kids to a local shoe store so he could buy each child a new pair of sneakers for the first day of school. Weatherford does things like this hoping the kids will walk away with more than just a new pair of shoes.

"It might cost me $100 to buy shoes for a kid, but I'm not doing it to buy them shoes," Weatherford says. "I'm doing it so I can have one-on-one time—even if it's just five or 10 minutes with each kid—to be able to tell them my story, but more importantly, to listen to their problems, listen to their struggles and offer my advice and encouragement."

"If I reach one kid to find confidence in themselves and help them set goals and dream big dreams, to me that's worth more than the $2,000-$3,000 I spent at the shoe store. I changed somebody's life."

Find activities for your ACTIVEkids