Teach Your Kids the Early Signs of Spring 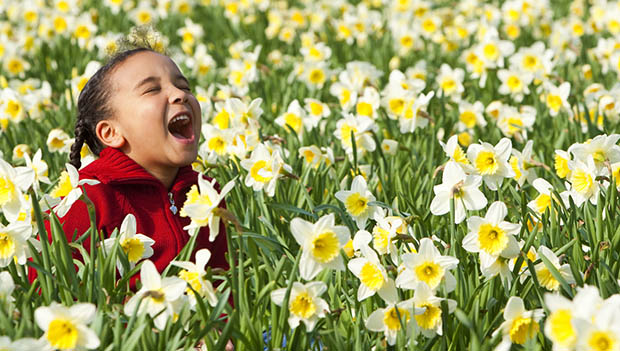 Have you noticed the songbirds singing early in the morning or seen the daffodils poking their green stalks through the mulch? Spring is on its way and to a keen observer, the earliest signs of the changing seasons are everywhere. There's no doubt that after a long winter, your kids are probably as ready to shake off the cabin fever as you are. Take them outside and help them learn to identify these early signs of spring.

Woodpeckers begin drumming in early spring and don't stop until the fall. The birds use drumming to communicate with other woodpeckers, mark their territory and attract a spring mate. If you hear a familiar rapping on the trees, rest assured that spring is on its way.

It seems like magic when the barren branches of deciduous trees suddenly start to bloom. Keep an eye out for the earliest bloomers that offer the first signs of spring. New Bradford pear trees, flowering cherry trees, willows, water maples and red maples are some of springtime's first to show buds. The trees that bloom first in your area may vary, so ask your local nursery or botanical garden which trees you should keep an eye on.

Some flowers begin to bloom.

Every year I'm surprised by how early the daffodil stalks begin shooting through the soil in my yard. Even when there's snow on the ground, those first green stems assure me that the season is turning a corner. Crocus, trillium, snowdrops and primroses are also early bloomers—keep an eye out for their shoots to begin popping up through the soil.

Listen for the spring peeper frog.

In the eastern United States and Canada, the chirping sound of the spring peeper, a small chorus frog, marks the beginning of spring. Spring peepers start vocalizing so early in spring that you'll often hear their call long before you notice any of the trees or flowers blooming in your neighborhood.

A popular landscaping shrub, forsythia is more than just an ornamental. When the brilliant yellow buds of the forsythia bush begin to bloom, it's a sure sign that spring will follow close behind.

The bees and butterflies return.

Some bee species begin to emerge as early as February in search of early spring flowers. On sunny days in late winter you may also see butterflies floating through the garden. Species, such as the mourning cloak butterflies, are some of the first arrivals. Monarch butterflies also begin migrating north again after spending the winter in warm southern climates.

Walk outside in the early morning—what do you hear? If the birds are tweeting and singing, it's a sure sign that spring is on its way. Robins are one bird that starts singing early, as well as warblers, sparrows, and finches. The presence of bluebirds is also a great sign that spring is approaching, as they don't migrate north until all chance of winter has passed.

In early spring, rabbits will start to mate at night, and some rabbits will even get into fights over territory or mates. Though you might not see the rabbits, you'll find signs of them everywhere. Small clumps of rabbit fur indicate a fight while rabbit tracks in the snow or mud will let you know that the rabbits have been active, even if you haven't been able to spot them with your own eyes.

Though it's hard to describe, everyone knows the rich, musty, earthy smell of spring when it hits the nose. Perhaps it's a mix of wet earth from early spring showers and the first hints of blooming bushes and flowers in the air, but that smell is a beloved sign that spring is creeping closer.

READ THIS NEXT: 9 Family Activities to Ring in Spring