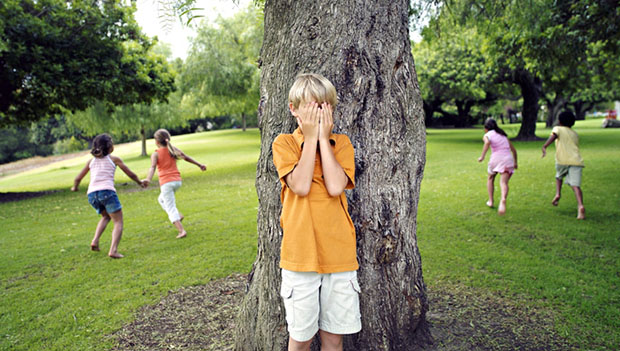 Who isn't a little nostalgic for their own childhood? We all listen for a shout of laughter from a front yard full of neighborhood kids. It's that sound that echoes the sounds of our own childhood games. Things have changed with technology, but those magic moments are still there waiting for our own kids. These favorite games can help them get a glimpse of your childhood and maybe encourage them to build some outdoor memories of their own.

Kickball
Like the best neighborhood games, kickball is flexible. Bases can be formal (base bags) or informal (rocks or a corner of the yard). You can add outfielders, or not, depending on how many kids are around to play. And, kids can play across ages, making it great for neighborhood parks or multiple groups of friends to play together.

Four Square
As you remember, the court is a square and divided into quarters. Decide which square is the lowest and which is the highest, then have each player stand in one square. The player in the highest square serves, and the goal is to get the ball past a player in another square. The ball can bounce only once in a square, and only the player in that square can hit the ball. Players rotate toward the highest square each time someone is "out", and a new player enters the game in the lowest square.

Sharks and Minnows
This game is intended to be played in water, but can easily be converted to land. Players line up on opposite sides of a field, yard or court. One player starts in the middle and is the shark, all others are minnows. The minnows run around the area as the shark begins tagging. Anybody tagged by the shark becomes another shark and the tagging continues, thus growing harder to avoid as the number of sharks grows. The last minnow untagged wins!

Freeze Tag
What kid doesn't want to run and chase their friends? Freeze tag is a twist on tag. One player starts as "it" and chases the other players to tag them. When a player is tagged by the person who is "it", that player freezes. They can move again, or "unfreeze" when another person tags them back in.

Simon Says
Simon Says may be a staple for parents of toddlers but originally got its start as a neighborhood game. Kids choose one person to be "Simon". "Simon" gives directions, but the group of players only does what they say when the command starts with "Simon says". Players who follow directions that don't begin with "Simon says" are out. Generally, the directions start slow and speed up, but kids can be as creative or silly as they want.

Hide and Seek
One player closes his eyes and counts, everyone else hides. It's pretty self-explanatory, right? But did you know that Hide and Seek has been played for literally hundreds of years across most cultures? Kids can play different variations, from sardines to hide and seek tag. It sounds wild, but just by playing this game, your kid is connecting to children all around the world.

Double Dutch
Do you remember the thrill of mastering the double-dutch entry? It's something that probably happened after lots of practice with a jump rope!  Double Dutch jumping is fun, plus it's great for health and coordination. It also teaches kids to work together, because turning the ropes is a skill as well. It's also tricky and will take more than a few tries, so your kids can build skills, learn to persevere and feel a sense of pride once they master the skill.

Flashlight Tag
Another variation of tag, this one is played at dusk and each player has a flashlight.  The person who is "it" shines their flashlight toward the other players, and person is tagged if they are caught in their flashlight beam.  It's a simple game that becomes magical because kids are playing under the stars.