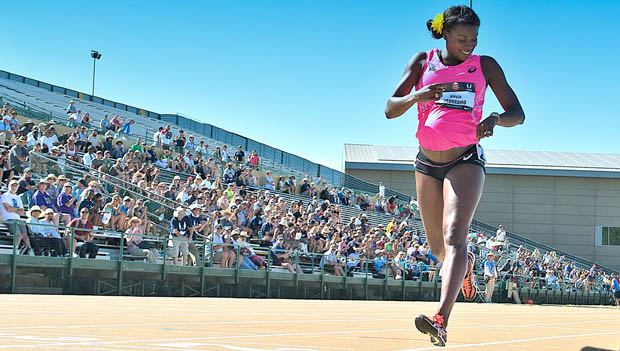 For most people a slight case of indigestion qualifies as an excuse to skip a workout, so the idea of a runner competing in a USA Outdoor Track & Field Championship while eight months pregnant may seem unfathomable. But that's exactly what Alysia Montano did in the summer of 2014.

She didn't do it to win or to set a PR, she did it to prove that being pregnant isn't the only extraordinary thing a pregnant woman can do.

With her focus now on the 2016 Summer Olympic Games in Rio de Janeiro, Montano spoke to ACTIVEkids.com about running while pregnant, parenthood and plans for the future.

ACTIVEkids.com: How do you balance your time between parenthood and training for your goal of making it to the Olympics this summer? 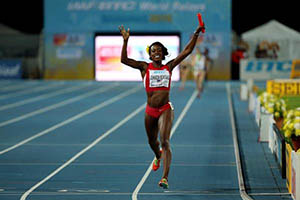 Montano: It definitely has been a new challenge for our family, but we've taken on the whole mindset of "it takes a village." I had an amazing opportunity last year to be able to live in my hometown for a year. We did that in order to be able to take on the challenges of a newborn and also have my family around during the first year of my daughter's life. I think that played a pivotal role in her development in that first year.

My first goal was my daughter, Linnea, and I really wanted [her first year] to be an amazing, special experience for her. But also, my job is just really unique in the way that I'm able to be around, but at the same time, I'm working. It's like I'm somewhere in the middle of a stay-at-home/working mom, if that makes sense. Anybody who works from home is kind of able to make their schedule work in a way that they can still be present; but at the same time, you have to [be able to] make work happen.

For us, I really tried to be diligent about making a schedule. I still am a really spontaneous person, but there are a lot of things I recognized I really had to make time for. Linnea's schedule is just as important as my schedule. I try to plan my schedule around both her and my husband's schedule so we can have a healthy mental, social and physical life. It really has taken a little bit of a juggling act and a lot of collaboration from everyone.

ACTIVEkids.com: Has being a parent changed your perspective or your approach when it comes to training and competing?

Montano: This first year has been crazy. I've [just completed] my first racing season in the first year of my daughter's life, which was pretty awesome for us and surprising that I was able to compete the way that I was this last year.

We approached it slowly and really wanted it to be a family experience. I used to go to these meets and it would just be me droning on and on and doing the same routine over and over again. I've slowly morphed into this person who really wanted to share my experiences with the people that I love and who have supported me. 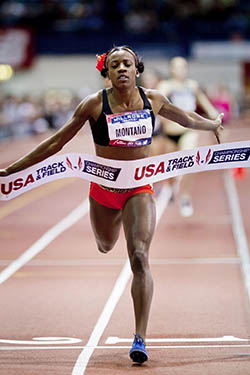 Seeing that I have this young girl who's going to become a woman, I wanted her to see what an empowered woman looks like. I really thought it would be a powerful experience for her to be able to watch her mom on the track, and [see] all of her hard work turn into something that could be quantified as an achievement.

Whether she remembers it or not, it'll be documented and she'll know that I cared about her being part of the experience. Hopefully it will be something she uses for motivation in all of her endeavors in her life.

ACTIVEkids.com: You made headlines a couple of years ago when you ran a race eight months pregnant. Why was that important to you?

Montano: I was 34 weeks pregnant when I ran at the USA National Championships in 2014. I approached my pregnancy with a lot of research, a lot of questions—the way I do anything. Everything I put my hands on, I want to be the best. I've always been like that.

The best advice I was given was to continue moving, so whatever I was doing beforehand I could continue doing, obviously with modifications that were necessary to my changing body.

I didn't even notice beforehand this huge stigma behind pregnant women and running—I always thought it was great. I certainly wasn't the first person to exercise or run during pregnancy, but I realized I was someone who had a platform to showcase the ability that pregnant women have and the amazing transformation our bodies go through.