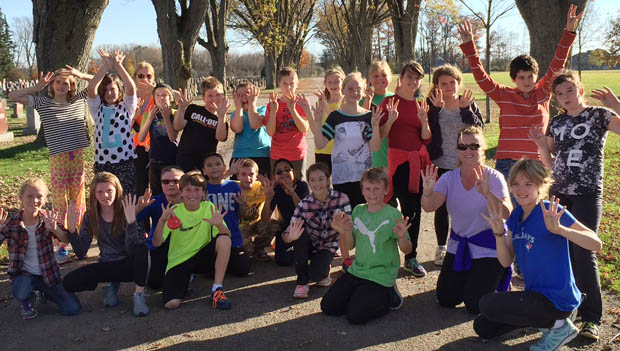 In September 2015 at Little Falls Public School in St. Marys, Ontario, Vice Principal Kerry Carlyle had a problem to solve: In order to allow one of her sixth grade teachers to coach students outside of her homeroom in math, Carlyle had to implement a formal program for the teacher's regular students at the same time.

Her solution? She decided to have the class try the Couch to 5K ® running program.

Carlyle had personally used the training app the previous year, and even started an informal running group with a few students. As a member of the Provincial Mental Health Task Force in the school district, she was particularly interested in showing the mental health and wellness benefits running can provide, specifically in terms of students' self-esteem.

In order to make the connection, Carlyle issued a survey to all 27 participating students prior to beginning the running program. She found that less than half the students would describe themselves as physically fit and capable of running five kilometers. The majority of the children described themselves as somewhat fit or unfit, and were uncertain if they could complete a 5K.

"I felt nervous because I get cramps really easily," says sixth-grader Lilly Coward. "I wasn't sure of my capabilities and at first I didn't like Ms. Carlyle at all. I was mad at her for making us do this." 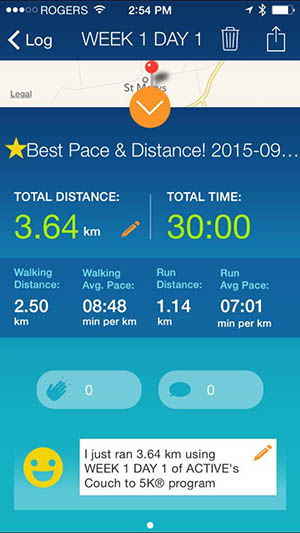 Despite a handful of initial resistors, the students began the training program right alongside their vice principal, who acknowledged the importance of demonstrating a commitment to physical and mental health.

"For me it was a moral imperative to model wellness," Carlyle says. "I can't just stand there and say, 'OK everybody, let's go. This is good for you.' I have to show that it's hard for me, too, and that I get sweaty and red-faced and I drag. But we want children to be resilient. We want them to be able to set a goal and achieve it, and not give up when it gets hard."

Sure enough, the kids started getting on board, some even voluntarily giving up their recess in order to complete runs without cutting into French class or homeroom time.

The students found various ways to keep themselves motivated throughout the nine-week training program.

Some would sing along to AC/DC and The Black Eyed Peas to keep their runs light-hearted. Some would write down motivational quotes to keep in their pockets and turn to when they felt discouraged. Others ran in support of their Toronto Blue Jays during the playoffs.

For most students, the greatest source of motivation may have been each other.

"If someone was straggling, some of my stronger runners would go back and run with them and say, 'Come on, you can do it,'" Carlyle says.

"It wasn't like a competition," says Carter McDougall, who is also a member of Little Falls' Leading Mentally Healthy Schools team. "You wanted everybody else to do well, too."

The kids received support from social media, too, as Carlyle would post progress updates on the @LittleFallsPS Twitter account throughout their journey. She says the feedback they received played an integral role in keeping the kids excited to achieve their goals.

"Using technology to celebrate our successes and share our hardships allowed us to make connections with so many people all over the world," Carlyle says. "The kids would always look forward to seeing if our tweet got noticed."

"When Ms. Carlyle posted our pictures and results and gave us feedback through Twitter, I felt like an Olympian," says Julia Cameron.

The group completed their final run on November 11, which is Remembrance Day in Canada.

"We wanted to end on Remembrance Day to honor those who gave us our freedoms. The kids really liked that," Carlyle says.

With the training program complete, the physical benefits of running became obvious.

"One of the young ladies has asthma and was really nervous at first, but because it was a gradual buildup she recognized that it helped her improve every time she ran," Carlyle says. "And now she's not afraid to run, because she knows her lungs can manage it.". 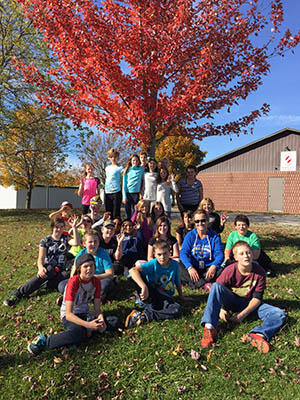 The mental and emotional benefits of physical activity were clear, too.

"A lot of times we ran in the morning, and because we were running in the morning, it made you feel good so you were ready to learn at school," Lydia Taylor says. "You were awake and refreshed, and you felt really good about yourself from running."

"Running helped me to better manage my emotions and made me feel calm," says Hannah Everett.

Carlyle says many of the kids have shown interest in keeping the program going year-round, and have even talked about starting a recess running club of their own to help sustain their fitness levels.

"When children suffer from low self-esteem or a negative sense of self-worth, the thought that they may be capable of achieving this accomplishment, of running a 5K, might seem daunting," Carlyle says. "But these kids did it. We've had an amazing experience."