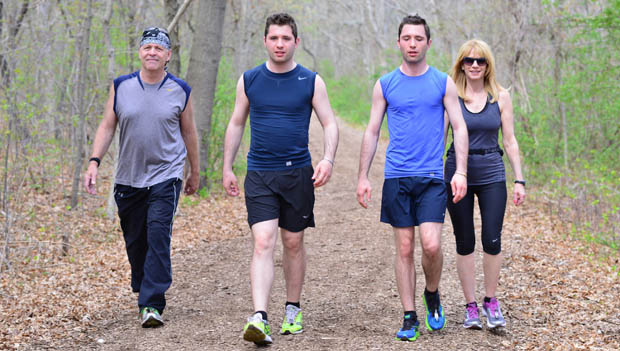 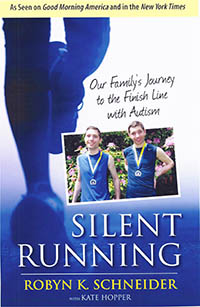 Autism is a neurological development disorder that affects one in 68 children. It operates on a spectrum that can range from mildly impaired to severely disabled.

When Robyn Schneider's twin sons were diagnosed with autism in 1992, she didn't even know what autistic meant. In her book, "Silent Running: Our Family's Journey to the Finish Line with Autism," Schneider recounts some of the challenges her family has faced since that initial diagnosis, from raising two sons with severe autism, to her husband's struggles of living with multiple sclerosis, to her own battle with breast cancer.

Schneider also shares one of her family's most powerful tools for dealing with those challenges: running.

By the time her sons, Alie (short for Alex) and Jamie, were 15 years old, Schneider had learned a lot about autism. She instituted an in-home program to help the boys cope with their behaviors, and even helped start a school in 1995 for children with autism near their home on Long Island.

As Alie and Jamie progressed through their teenage years, the Schneiders looked for ways for their sons to burn off excess energy, enrolling them in activities like gymnastics, swimming and basketball. The parents were hesitant when a friend suggested they sign the boys up for a local running club that paired disabled kids with volunteer running guides, but after their first session that anxiety was gone.

There was no question how the boys felt about running. They were beaming. The tight coil of worry in my chest gave way to something else: elation. It was the most amazing feeling to see them that happy.

They soon learned that their identical twins had two very distinct running personalities. Alie was a speed demon who seemed to get faster with every session, and Jamie was a Zen runner, content to run at his "forever pace" as he soaked in the sights and sounds around him.

Before long, the boys started running in mainstream races with one-on-one coaches to help them navigate safely through the courses. The media began to take notice and share their story.

Allan and I had no idea what to expect from the article, but when the paper arrived on the following Sunday, there they were, front and center in the Long Island section of the New York Times! It felt like a testament to the fact that living with severe autism didn't mean living without talent, without joy.

With every race there would be more and more people cheering for Alie and Jamie at the finish line as the Schneiders were embraced by the "warm and welcoming" Long Island running community.