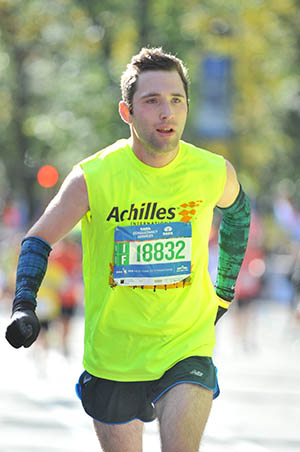 Eventually, Schneider and her husband, Allan, took up running as well, as they sought out healthier, more active lifestyles in the face of their own respective diagnoses. They would run alongside Jamie (Alie was too fast) and enjoyed the bond running created.

As running became more ingrained in their lives, Schneider even led the charge on the creation of the Blazing Trails 4-Autism race, which benefitted their school and brought in 800 participants in its inaugural year.

By March of 2009 Alie (left) was ready for his first half marathon, which he completed in 1:32:34, a 7:04 pace, placing second in his age group. Jamie's first half followed in September, and the boys showed no signs of slowing down.

When the boys were young, if someone had told me that they would be marathoners, I wouldn't have believed it...How could boys who spun and flapped and climbed and screeched ever have the discipline and focus to run 26.2 miles?

It would have seemed impossible.

But as 2009 became 2010 and the boys turned 20, it was clear that they were going to become marathoners. 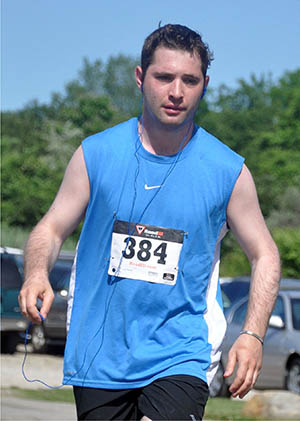 At the time of writing "Silent Running," the boys had run in nearly 150 races, including nine marathons.

What's amazing to me as I think back on our lives and on these recent years is that for us, running began as something the boys could do to burn their excess energy, to calm them down. But over the years it's something that's brought our family closer together and, most importantly, brought us all joy.

Schneider says she wrote the book to leave a legacy for her sons and to offer inspiration and strength to people facing adversity in their own lives.

"'Silent Running' tells the real inside story of what severe autism is really like and how we were able to find a silver lining," Schneider says. "I kept a journal that came to life, and I was able to relive and reflect on our journey, and honor the people who meant so much to me and my family."